Stats: Brandon is growing out of the baby stage and becoming a little boy! We get stats next month.

Clothes/Size: He’s still in 9 month clothes for the most part. The waist on 12 month pants is a little big still. I tried to transition the clothes this weekend until I noticed most of the 12 month clothes are shorts and t-shirts. Great.

Favorite Foods: He still loves anything with color. Avocado, Strawberries, Sweet Potato, Carrots and Blueberries. He still eats the same meal we do, just baby-fied.

How much am I eating: His meals haven’t changed since my last post.. Breakfast is pureed apples/pears mixed with whole fat plain yogurt and baby cereal. He also gets either cheerios or pancakes on the side. He’ll have a 4-5oz bottle late morning. Lunch is whatever leftovers we have but always a protein and a veggie, egg yolk, ham, turkey and veggies. He can normally hold off eating until dinner where he usually has whatever we’re eating. Again, some protein (shrimp, sausage, chicken, turkey…) a starch and a veggie or two. And another 4-6oz bottle before bed. He has been grabbing for the fruits over anything else on his plate lately.

Words: He still is against talking. A point is usually accompanied with “ehh”, flipping the light switch is “ahhhh” (for on), book is still bough, I THINK Dada is “da”, bottle is “mamamamama”, cows say “bbbbbbb” and so do cats and bees. He knows what things are when we say them he just doesn’t want to say them himself.

Activities: Picking toys up and dropping them or throwing them, standing, walking along things and letting go for a hot second, opening and closing any doors he can find, opening drawers and flipping light switches. He can properly get off the couch and bed and climb up and down the stairs without help.

Sleep: Sleeping hasn’t been too awful lately. He’s been fighting a cold on top of teething – but things could be worse. He had a few weeks of (what we think) were night terrors and they were horrible. But he has been sleeping great the last few nights and if he wakes up and makes noise he can usually figure things out himself.

Signature Moves: Dancing, climbing the stairs, picking up toys and dropping them. This little man is more and more amazing everyday.

Mom’s Proudest Moment: I find myself more and more proud of…well, myself! I think back to the newborn days and how amazingly difficult they were and how I would count down the days until Brandon would be independent and not cry and fuss ALL the time. I am proud of myself that I am really taking the time to enjoy his everyday and every moment I get to spend with him. I don’t get nearly as frustrated or bothered by things I used to. My proudest moments are the ones where Brandon shows how smart he’s becoming, learning words that we say and pointing to his toys. I ask him where “baby Brandon is” and he looks up at the professional hospital pictures we hung on his wall. He’s such a sweet little man, sharing his toys with us and giving kisses. He is staring to play by himself and entertain himself and it has been a blessing for sure!

Dad’s Proudest Moment: Kevin has also really enjoyed seeing Brandon play by himself and have fun with his toys. His proudest moments are hearing Brandon babble. He has started to really “talk” in length to himself while he’s playing. When he’s on a mission crawling through the house 100mph he has these little babble sessions which go something like “fths-fnhs-ehh-phbhg-bhheehg-ftthsh”! Who knows what he’s saying, but it’s adorable!

Valentine’s Day….a day of love, a day of chocolate, flowers and fancy dinners. Or if you have littles, it’s a day like any other. I’m getting into the spirit this year and putting together a little goody box of festive items for Brandon that he can use now and throughout the year – because, who wants to spend money on something for one day? 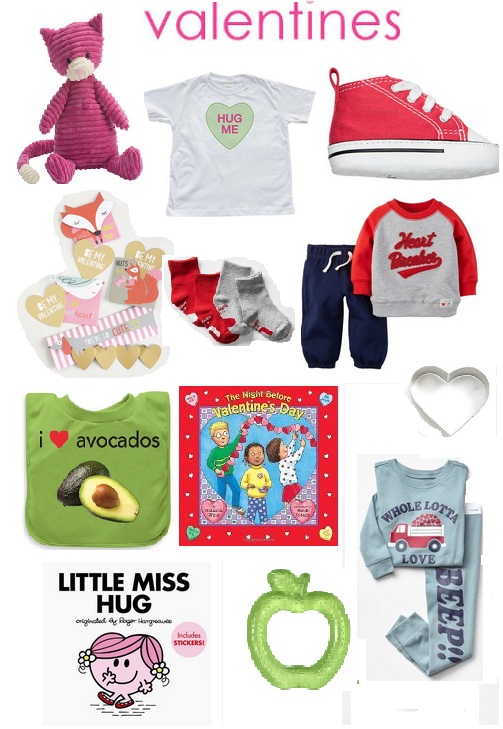 I’ve been having so much fun finding things for Valentine’s Day, Brandon’s 1st Birthday, St. Patrick’s Day and Easter since everything falls within 6 weeks of each other this year. I found these “Night Before” books on Amazon and grabbed a few for the upcoming holidays, we’ve been reading this one for a few days now and it is a really cute find! Then I stumbled on the Little Miss (and Little Mr) books from when I was a kid and had to scoop those up because they are JUST the cutest.

It seems like this boy grows out of pajamas faster than any other article of clothing and right behind PJs are socks! Brandon is in socks more than shoes so new ones are always a must. I’m not going to spend the money on an outfit that’s only going to work for one day, but the super cute Candy Heart Tee, Heart Breaker outfit and red Chuck’s I just couldn’t pass up!

Toys . Toys. Toys, One can never be enough! Brandon is not entirely into stuffed animals yet but that teether he will probably be obsessed with for days (and days). Don’t forget to write out your Valentine’s and seal them with a kiss, or attach some heart-shaped cookies or muffins. Yes please, and thank you.

The bib needs its own paragraph. Come ON! This will be Valentine’s or Birthday gift because it is hands down the cutest thing I’ve ever seen.

I hope your day is full of love, fun and most importantly goodies to share with the ones you hold close.