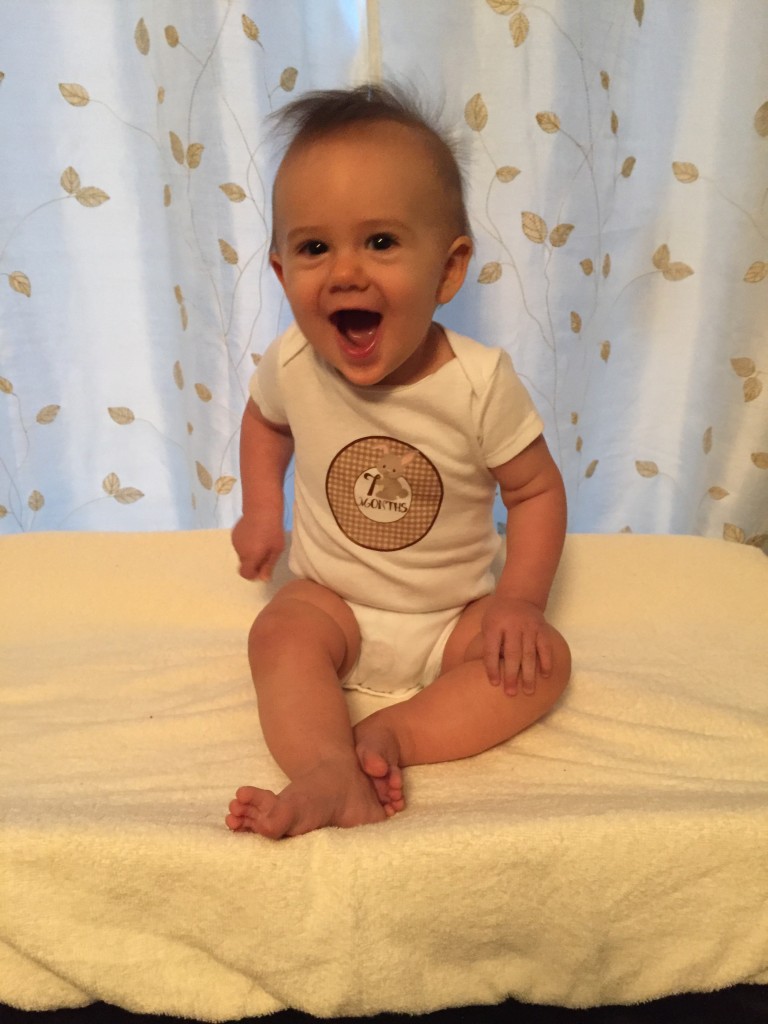 Stats: Don’t go back to the doctor until 9 months – but he’s probably pushing 20lb!

Clothes/Size: Brandon is going back and forth between 6 and 6-9 month clothes. He has always been right on target size wise. I have put him in 12 month clothes to add layers on these chilly mornings! The only thing that doesn’t fit are one-piece outfits with feet in, his feet are too damn big! Little man is wearing 12-24 month socks. AYE!

Favorite Foods: Brandon eats all of the typical baby food (all made by mama). He really loves his apples, sweet potatoes and carrots. He’s tried some pasta and fish out at restaurants because little man has to literally eat ANYTHING he sees.

Diaper size: Chillin’ in size 3, I think (hope) we’ll be here for a while since we have SO darn many. But really, do we NEED Mickey Mouse stamped ALL over the diaper? Can’t they just make plain white ones?

How much am I eating: This child will eat and eat and eat – he has no off switch. When the bowl is empty, he gets SO upset. He’s eating about 1 cup of solids (mixed with some oatmeal and water), has about 4oz of juice/water in a sippy cup and then about 3oz of milk – this is just breakfast. He has about 2 bottles during the day – about 6 oz each, then has another cup or so of food for dinner and a small bottle – sometimes a mum-mum while we’re eating if he gets antsy and then about 4oz of milk right before bed. We are trying to keep his milk intake up as the doctor say anywhere from 16-30oz is good but to aim for 24oz. He’s a pro with his little sippy cup though, such a big boy now.

Words: No words yet. He understands language and knows “Zoe” (we must yell at her a lot)! The most hilarious thing he does is laugh to imitate us or to get us to laugh. He cracks me up.

Activities: Oh boy, he’s army crawling and rolling ALL over the place. Last night he officially got up on all fours and tried to crawl. I’d say another week or two and we’re in trouuuuuuble!

Sleep: Once he hit 6 months he slept RIGHT through the night. The two weeks later he came down in a cold. ugh. Ever since then he’s been waking 1-2 times and will not settle unless he gets a pacifier. Double-ugh. He’s still sleeping from about 8pm-7am….can’t complain.

Favorite Things: We’re at the point where it’s time to start to put toys away and bring out new ones because he’s getting sick of the same old. His favorite thing is tubby time! Child kicks like nobodies business and loves playing with his toys.

Mom’s Proudest Moment: I try to sit back and take in everything because I know at the drop of a hat, he’ll be 15 and want nothing to do with us! I am so proud of how smart little man is and how he just picks things up SO quickly. No learning curve when it came to a sippy cup, he picked it up and drank! He’s starting to hold his own bottle at the dinner table now which means BIG things for us so we can enjoy dinner as well.

Dad’s Proudest Moment: Kevin loves showing Brandon new things. They walk outside together and look at nature and get dirty. Daddy is always there to play and roll around with Brandon and hopefully not let him roll off the couch! 🙂 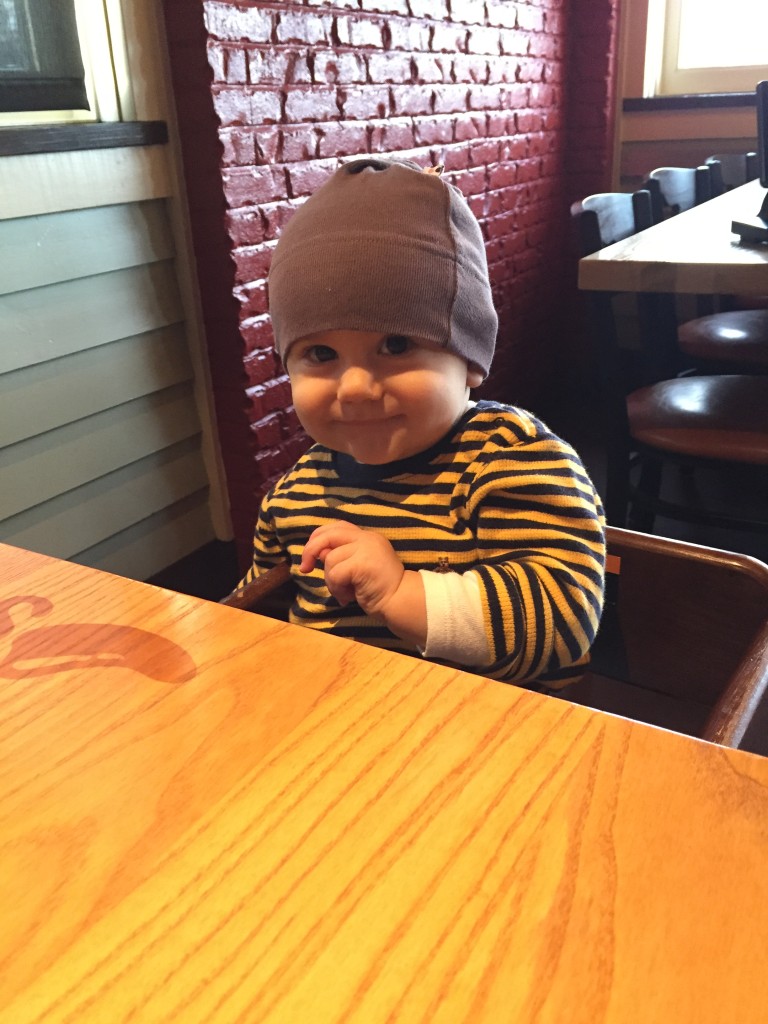 Little man is SO good out at restaurants too. Love him. <3