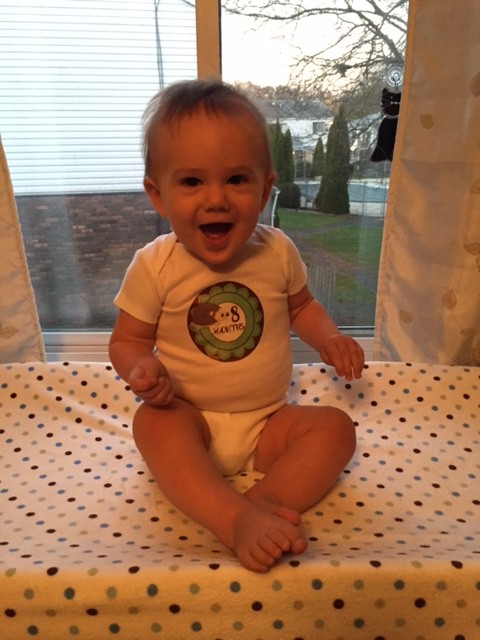 Stats: Don’t go back to the doctor until next month

Clothes/Size: Brandon is transitioning out of 6 month clothes and into 6-9 and 9 month. He has been pretty much right on target with his sizing since he was born. He can wear 12 month clothes that have been washed/pre-worn and shrunk.

Favorite Foods: Anything. Absolutely ANYTHING. There is nothing he will not try. Not sure he loves green beans, but he eats them. Everything from spinach, to carrots and eggyolks, chicken and pork. He’s even tried some eggplant. 🙂

How much am I eating: He literally has no off switch which is good and bad at the same time! As long as you keep feeding him, he’ll keep eating. He eats 3 meals – breakfast and dinner still consist of pureed food as well as solids he has to chew and lunch is pretty much all chewables.

Words: He does a lot of babbling – bababababa, daddadadadad, mamamamamama…. and some squeaking and squealing. He tries to say “goodbye” when his toy turns off and “meow” when the cat comes on.

Activities: Brandon just wants to be on the move all day long. He does NOT sit still, does not just sit or lay with you…he’s active every waking moment and all over the place. He is learning “no” and really has been a great crawling child.

Sleep: Sleep has been all over the place and it’s getting old now. Every. Single. Night. Is. Different. Sometimes he’ll sleep 8pm-630am and the next night he wants up every 30 minutes between 8-10pm and then another couple times throughout the night. He cries for his pacifier and then it’s back to sleep. Luckily, in the morning he’s content sitting and playing in his crib for about 30 minutes until we’re ready to get him up.

Favorite Things: He would rather bang on the DVD player, eat Zoe’s foil ball and whip her ribbon around the house. If he’s not playing with an old remote control or trying to climb the walls to get to our phones, he has been enjoying his Baby Einstein Music Table and playing with his bath toys outside of the tub.

Signature Moves: Crawling. Crawling. And more crawling. He has it down to a science now and it’s the absolute cutest thing on the planet. He’s so tiny creeping around the floor. We have now had to get the gates up and block off the stairs – until Zoe jumps over them, knocks it over and it gives Brandon a nice cut on his nose. #parentfail Brandon pulls himself up on whatever he can get a hold on. So independent and we love it.

Mom’s Proudest Moment: We have to talk about how Brandon has a death wish at his old age of 8 months. LONG story short…this weekend while at a Baptism, he decided he wanted to eat a confetti in the shape of a cross. A large cross. We had NO idea it was in his mouth. We were feeding him perfectly fine then all the sudden he was crying and would not stop, could not be consoled. No bottle, no pacifier…Kevin took him outside and shoved his finger down his throat and out came a huge cross. Honestly. I thought that was the scariest day of my life as a Mom until tonight. I put Brandon down to walk into the kitchen…he started a 2 second crying fit and when I came back in he was not crying…or breathing. Child held his breath when he was crying and made himself pass out. I swear….he’s going to make me crazy!! Poor thing was a little lethargic and blue. Luckily, the doctor noticed this months ago and told us how to get him to snap out of it. ARGH! Brandon, you’re killing us!

Dad’s Proudest Moment: Since this is my blog, I can say what I want. Not sure I mentioned this a couple weeks ago but while Kevin was “watching” Brandon, he decided to crawl through the mound of cat puke which Zoe so nicely left in the middle of the carpet. Bath before 8am. Work day win. Aside from that, Daddy loves the open mouth kisses, the dancing to good music and just taking a step back to look at this little man we created.