I’ll kick off February with this weeks grocery shopping and the Meal Plan. I feel like this week I over-bought which will lead to a refrigerator FULL of food (and hoping it doesn’t get thrown out). Kevin is going up to Vermont Thursday with my Dad for a guy’s weekend and Alumni Snowboard Event…so I’ll just hang out and eat myself to death basically.

I have too many meals planned this week so not everything will get made –  some may turn into lunches and some will made next week. But here’s a look at our healthful meals for the week. 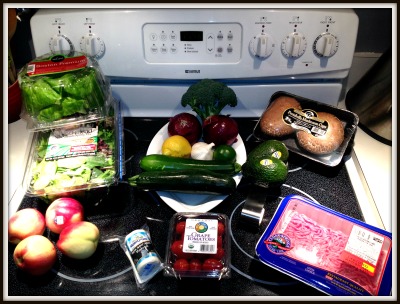 Monday’s we have been SO good at trying to keep it meatless; however, so that certain things don’t go bad later in the week, I think we will postpone the meatless meal until Tuesday or Wednesday!

Monday – We’re thinking Steak Fajitas! We had some steak last week and they were SO large we saved the leftovers and plan to make a new meal from them. If we have enough after having Steak and Eggs for Breakfast. YUM!

Tuesday – Grilled Portobella & Veggie Sandwiches with Goat Cheese and Sweet Pepper Spread. Oh Em Gee. We made these a couple weeks ago – were a little iffy about them, but seriously one of the best sandwiches I have ever had! I’ll post the recipe later in the week. YUM. Cannot wait for these. Even Kevin loved them. One recipe that turned out to be a major winner, among many losers.

Wednesday – Asian Chicken Lettuce Cups. I have always been obsessed with lettuce wraps and get them almost anywhere I go.

Thursday – Curried Lamb Patties on Naan. Saw RR make these one day and it happened to be in her magazine as well and boy do they look tasty!

Phew. My belly aches just thinking about the upcoming week of indulging. We need some food detox after a fun-filled weekend of partying.

As requested by my Momma, here is a picture of the Patriot’s Mannequin at Macy’s in NYC.