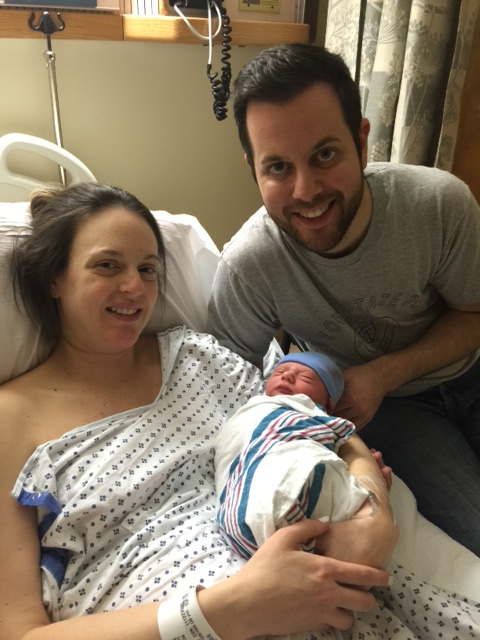 Brandon came into the world rather quickly which was a joy and a panic! I woke up around 1am with small contractions which were pretty consistently 10 minutes apart until 8am. I let Kevin remain in a deep sleep as I knew I needed him to be my coach during the day – if this was the big day. He woke up for work and I told him I had been having contractions so I was staying home from work, he said he would too. My contractions tapered off around breakfast so we decided to go for a little walk around the block to see if it would get things going again. Contractions started again around 930/10am but they were 15-20 minutes apart and not very consistent. I thought that taking the day off of work was a waste and the baby was not coming. Around 11am they began getting a little stronger and consistently 15 minutes apart so Kevin prepped my labor staging area where I would be camping out for the next 5 hours. 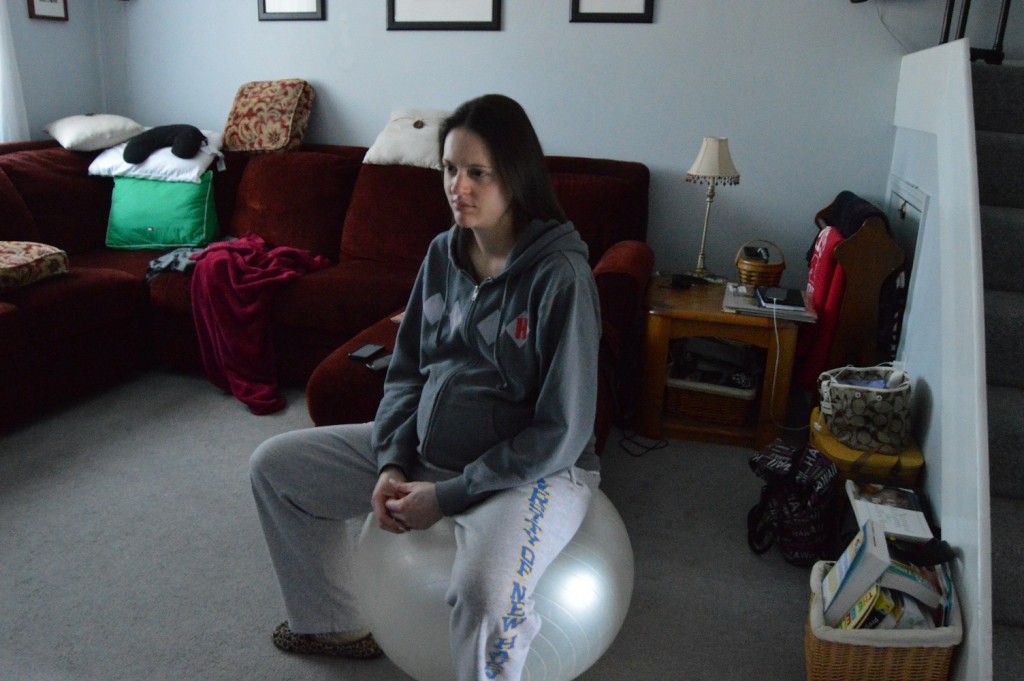 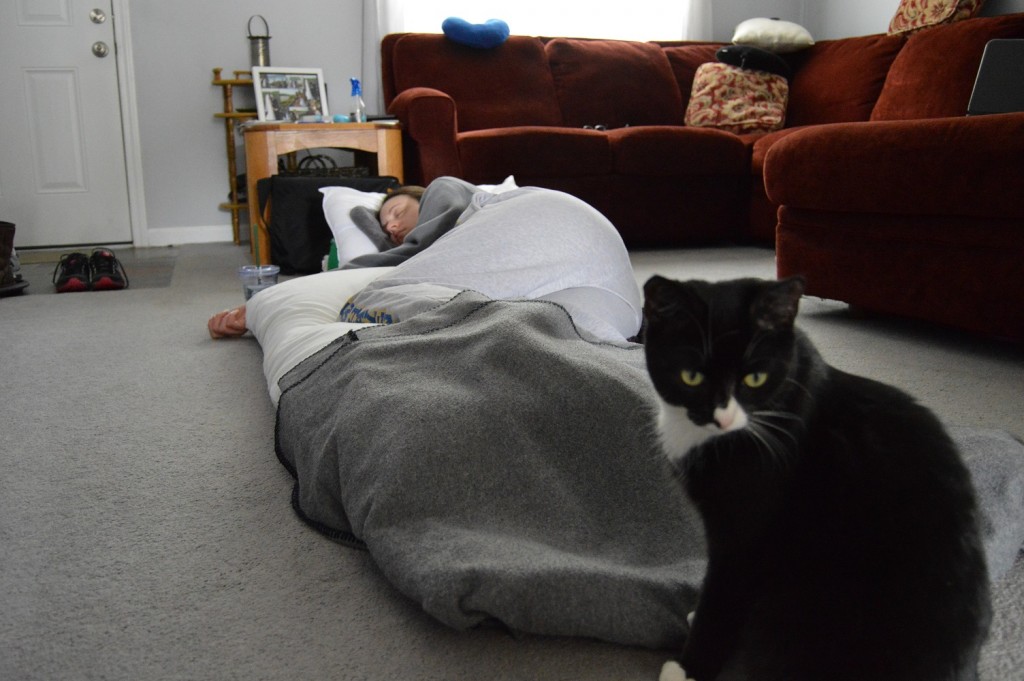 Originally, we were supposed to call the doctor when my water broke or the contractions were 5 minutes apart for about an hour. Contractions were 15 minutes apart for quite some time – but in the meantime we ate some lunch, walked around, I kept having to use the bathroom and I wasn’t doing so bad. Those 15 minute ones QUICKLY became 7 minute contractions and they started to get hot and heavy. I had these for a while and soon there where smaller “tremor” contractions in between the big ones. We called the doctor, I was able to talk to the doctor and she said to call back when they were 3 minutes apart for one hour – this would be considered “active labor” and still plenty of time since this was my first baby. Within the hour, those little tremor contractions became real ones and they were constant at 3 minutes and they were getting stronger by the second. We called the doctor again and she (reluctantly) agreed we could come to the hospital. I was almost not able to talk to her as they were so painful. Now I understand what “talking through” a contraction means because at 7 minutes I could and at 3 I couldn’t.

Luckily, Kevin had packed the car hours earlier JUST in case this was real labor so when it was time to go we could almost just run out the door – which we did. From the door to the car I had about 3 contractions and we were off. Kevin texted our families to let them know were en route. My eyes were completely closed from the minute we left the house until the minute Brandon was born…I held onto the car door for dear life and to help ease the pain. This was about 5pm.

We arrived at the hospital, I had a contraction as the valet came to get the car – we checked in and I was wheeled up to triage. I was quickly undressed and thrown into a gown where the doctor could check and see how dilated I was. 6cm! I thought, wow…this is really happening. I wanted a natural birth from the beginning and was prepared to work through the contractions with relaxation – which I had been doing all afternoon with the help of Kevin. When the nurse asked what my plans were for pain management I said I needed the epidural, pronto. Of course it was in between screams and moans because I was in some good pain. Within minutes, the contractions were coming one on top of the other and I had no time to regroup. I was squeezing Kevin’s hand, holding onto the mattress and moaning. The next contraction I had an urge to push that came out of nowhere. I told her “I’m pushing, I don’t know what I’m pushing but I’m pushing”. The nurse called for the doctor to come back and told him I was “pushy”…he checked me again and boom, my water broke…before I knew it they were taking me down the hall to labor and delivery. (clearly this is half my memory and half Kevin’s – my eyes are STILL closed).

Prior to this, the nurse was able to insert the IV for the epi which I would never get. We got to the room, I peeked out of one eye and I saw my doctor all suited up in scrubs with a face shield. A slight panic came over me as the bed was broken down and my legs were thrown up into stirrups. I hear, “on the next contraction you have to push”. I thought, wait…where’s my epidural? I can’t push yet. Boom. Contraction hits and my legs are pulled out and I’m pushing. They told me I need to hold my breath and push, hold onto my legs and bear down. With all the energy I had, all I could say was “hips”…this was the que for Kevin to remind the nurses of my hips. He said “she’s had hip surgery”, they asked what hip, he said “both!”. At that point, they pulled my legs back instead of out and NOW I was ready to push this nugget out. Two more sets of pushes and out came the head followed by the body. It was SO fast, I literally was in shock.

They placed the baby on my stomach and Kevin and I just loved on it and couldn’t believe what had just happened. After about 10 seconds or what seemed like an eternity, I said “well, what is it???”. I think everyone else was a little shocked too and forgot to announce the sex. Kevin said, Oh yeah! They checked and announced, “It’s a Boy!”.

11:00am – I head to the floor and prepare for an afternoon of relaxation! contractions are 15 minutes apart and more consistent.

3:00pm – contractions 7 minutes apart consistently with tremors in between.

4:30pm – called the doctor and she told us to head to the hospital.

The contractions went from 15 minutes to 3 minutes in the blink of an eye. If we hit traffic, or had to pack or do anything else…this baby would have been born in the car, I am sure of it! Although the pain was something I could have never, ever imagined…I am so glad things happened how they did, no pain meds and very quick – almost too quick.

I was stitched up and within the next couple hours we were heading to our postpartum room. But first, we had a visit from Grandma and Grandpa – they had no idea Brandon was here when they came in the room!

On our way to our room. 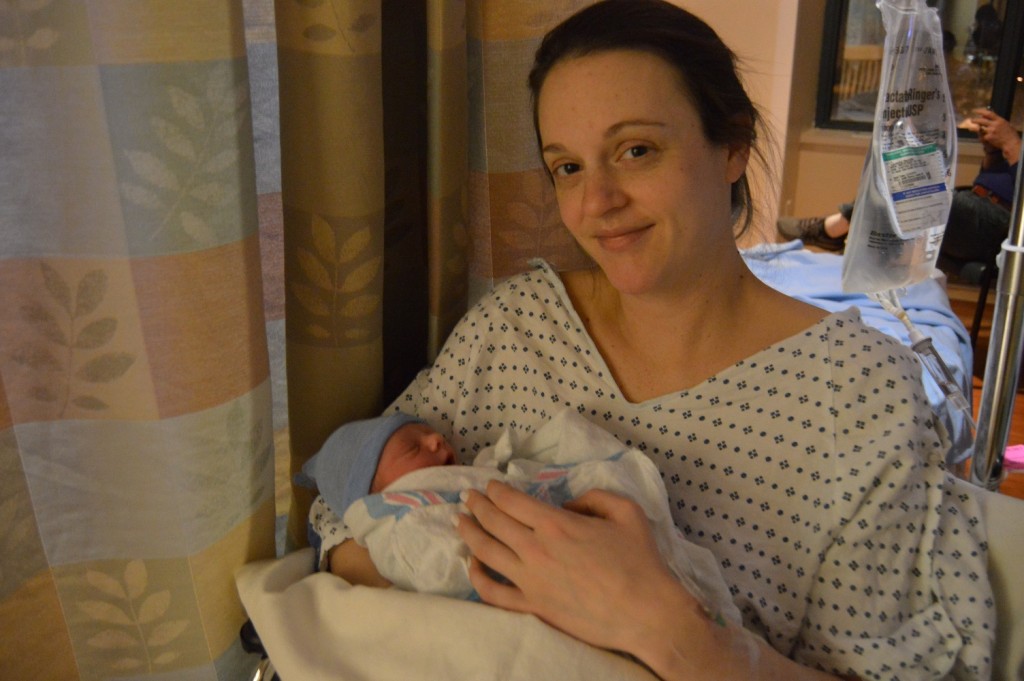 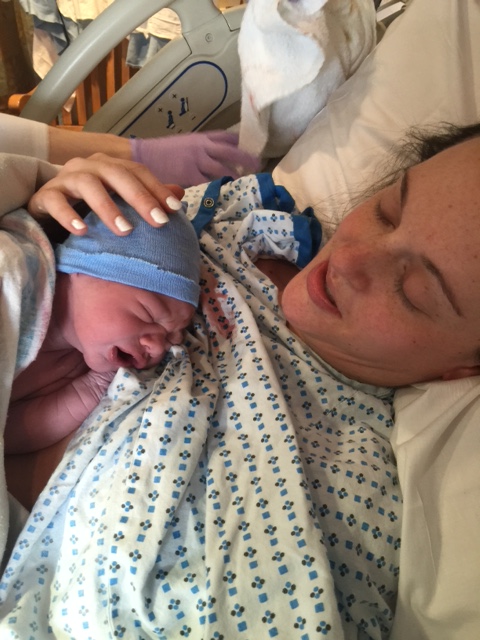 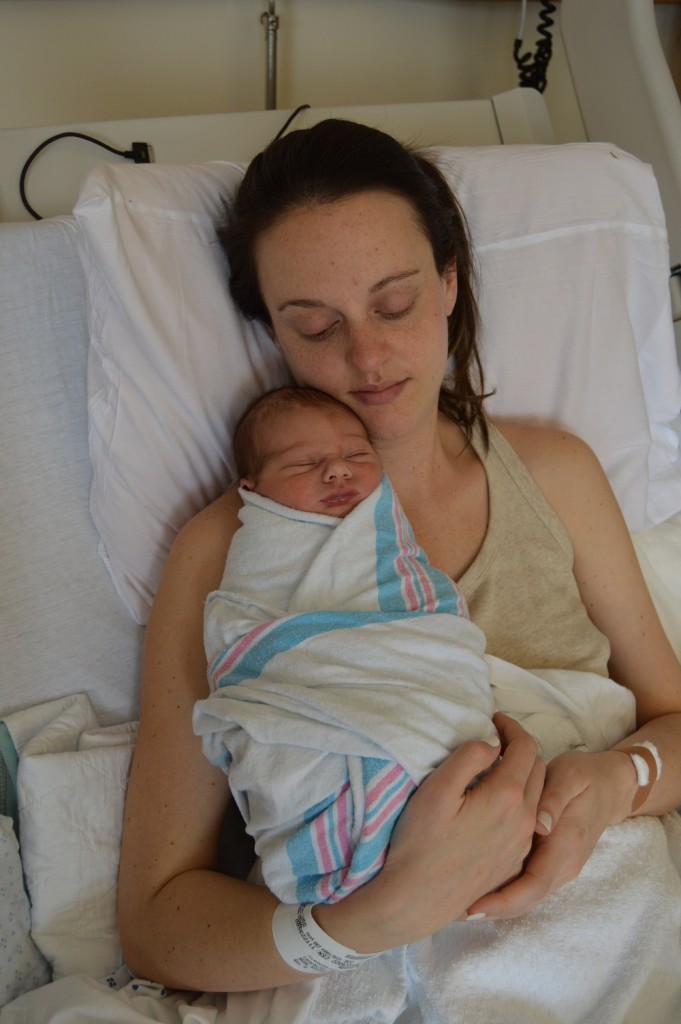 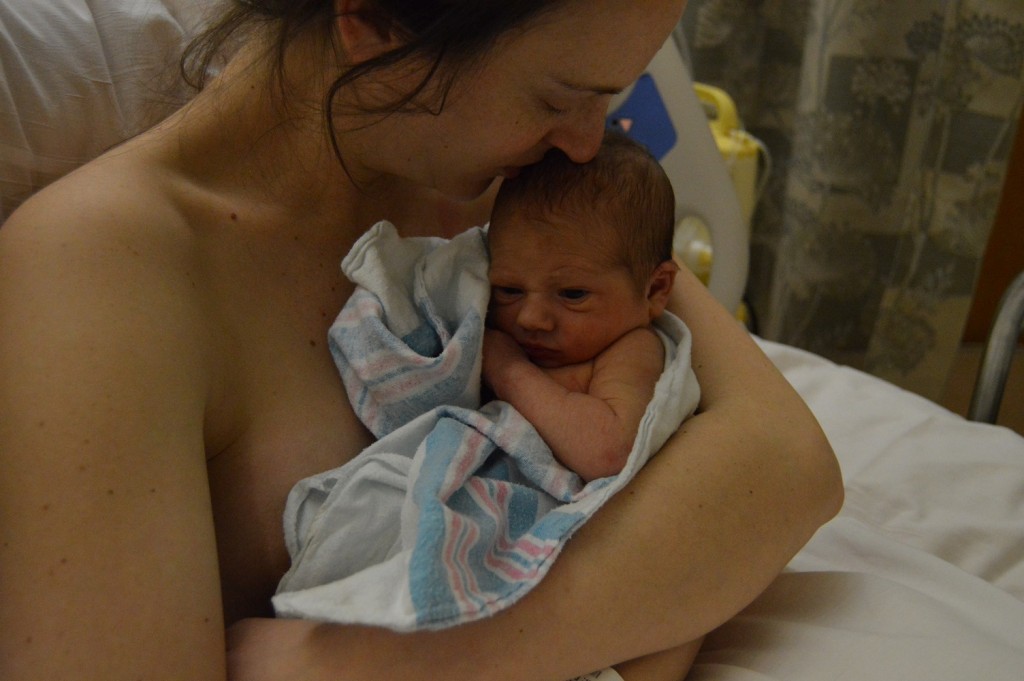 Brandon was visited by all of his loving Grandparents, and one of his Great Grandmothers during his first week home! 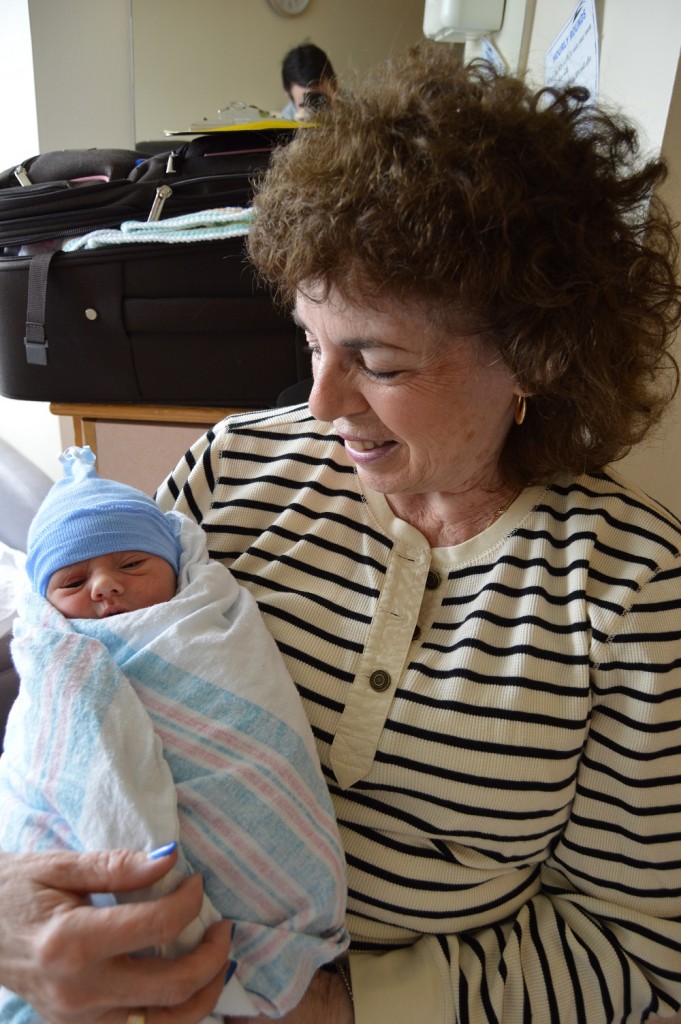 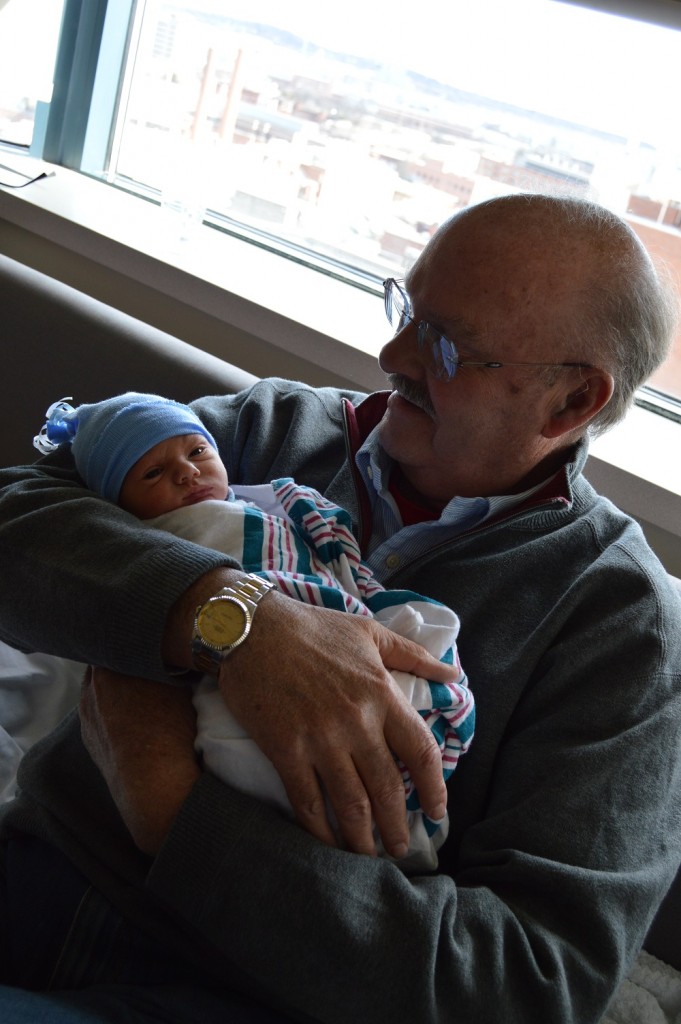 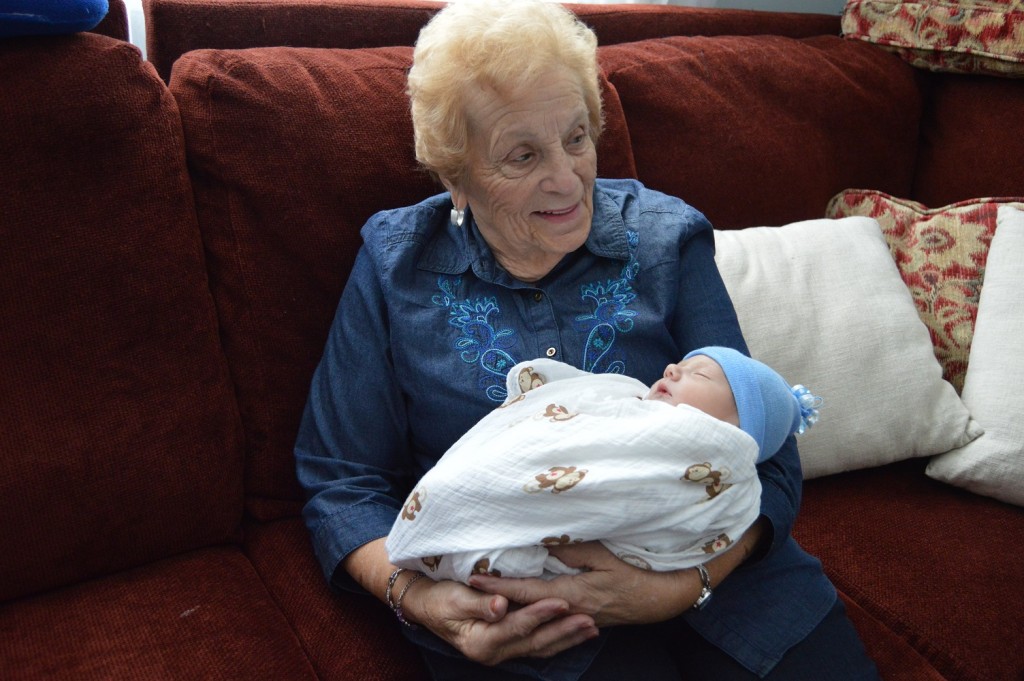 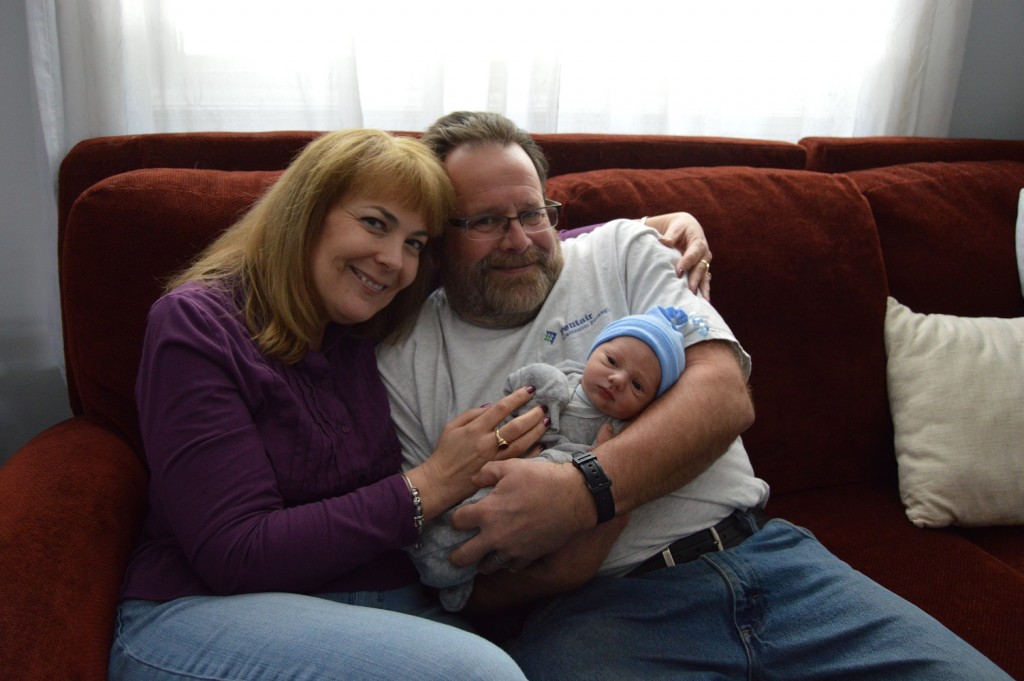 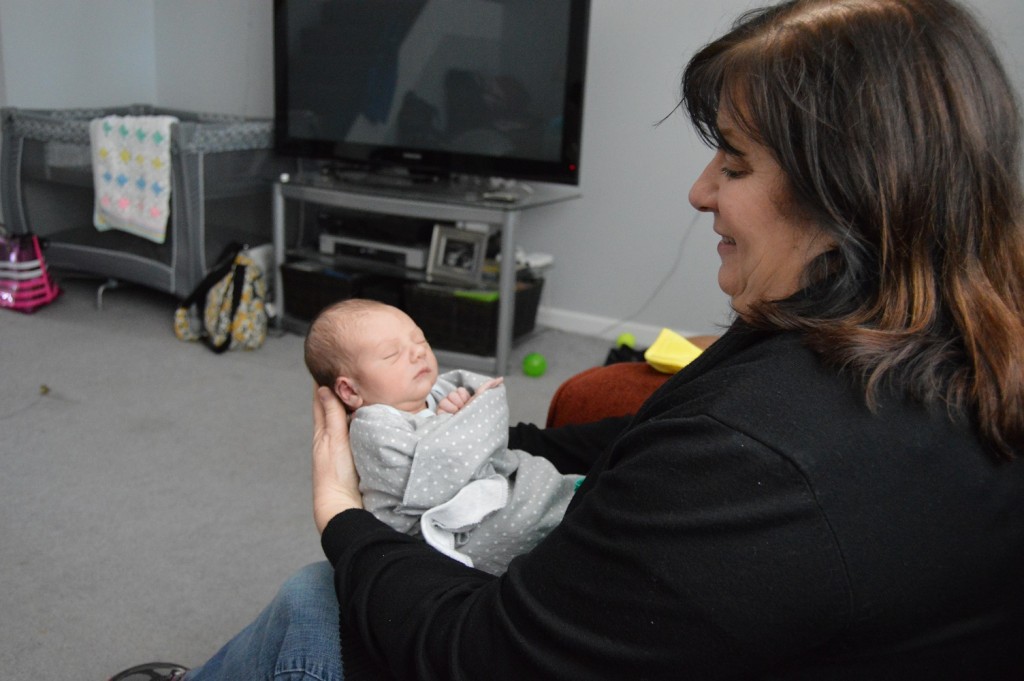 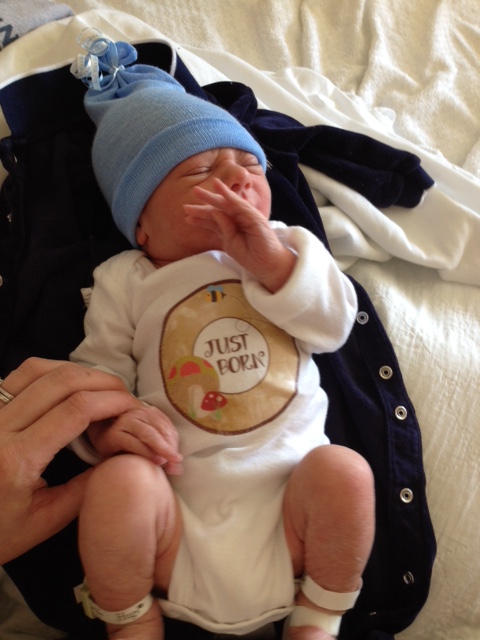 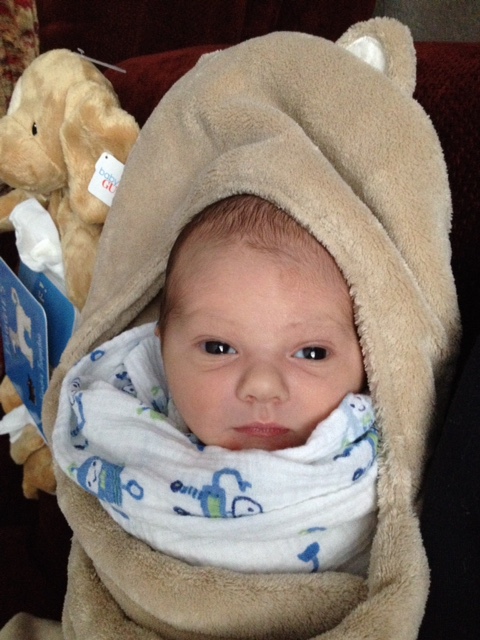 10 thoughts on “Welcome to the World”